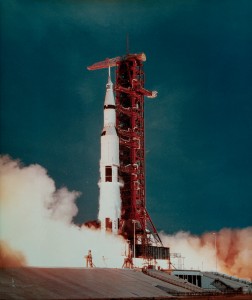 One of the main reasons I felt compelled to write my memoir The Step was to insure all of the hard working men and women who helped bring Apollo to fruition received proper credit. So much of the story has been forgotten in the history books. Our children learn the names of the astronauts, but have no concept of what a monumental accomplishment the Apollo project was, how many people were involved, or how crucial winning the space race was to the status of the US globally. I worked for IBM at Cape Kennedy, and I was disappointed to see upon visiting the company website, that it too had skipped over the contributions it’s employees made to the project. The following is my letter to IBM’s President & CEO.

I enjoyed almost ten years working for IBM at Cape Kennedy on the Apollo program. In looking up IBM’s website depicting its history from 1930-1979, I found only the following sentence about IBM ‘s commitment to our space program. “The latter half of the 1960’s saw IBM continue its support of space exploration, participating in the 1965 Gemini flights, 1966 Saturn flights and 1969 lunar mission.”

Several of my retired IBM friends have urged me to write you about a part of IBM history that you might not be aware. It’s all part of my book, The Step, which I am confident will also be made into a major motion picture. It deals with the IBM Apollo launch support team at Kennedy Space Center in the 60’s and 70’s.

As it states on the back cover, “The names of the astronauts will forever be inscribed in our history books, but the names of the entire Apollo launch support team at the Kennedy Space Center and the thousands who supported Apollo elsewhere will only be known to a few.

“It is the technical team, the engineers, analysts, programmers, and yes, even the secretaries and typists who kept the administrative side moving, who are portrayed in this book. This combined team, after achieving an unbelievable goal of launching men on the moon within the 10-year limit set by Kennedy, performed in an exemplary manner.”

I believe they were the greatest technological team ever assembled, achieving the most difficult challenge of all mankind to date. I speak from experience; I was a PR writer for IBM, coming up from the ranks of secretary and finally to a writing position. I wrote about these people. I know the sacrifices …the commitment was intense. There were Apollo IBMers at the Cape, Houston, Huntsville, Owego and Gaithersburg. In the Epilogue section, I added the following historical notes:

“Under the leadership of CEO Louis Gerstner, Jr., the Federal Systems Division of IBM, whose employees had excelled in all aspects of this country’s space program, was sold in 1994 to Loral Corporation much to the dismay of NASA and the heartbreak of thousands of IBMers. In 1995, Loral sold its defense electronics and systems integration business to Lockheed Martin. The following year, several of those former Loral units were spun off by Lockheed Martin to become the core of L-3 Communications. “

My closing words of The Step include: “I hope I’ve given you a small glimpse into what it was like for a woman working among all that testosterone of dedicated engineers, and astronauts, and everyday people…all committed to a national goal…in those unforgettable years…when IBM’s banner was never flown higher, nor shined brighter, than the years of Apollo…when we all had “The Step.”

Recently I took my cousin on a NASA bus tour through Kennedy Space Center. There on display was the giant Saturn V vehicle, separated into stages but nowhere were the names of the contractors displayed…it was as if NASA had done everything. The lack of recognition for the contractors doesn’t change history and the fact that there were many unsung heroes, brilliant systems engineers, analysts, programmers, doing things that had never been done before, toiling away behind the scenes that made this momentous, game-changing feat happen.

Now, NASA is constructing a new building, entitled “Heroes and Legends,” again dedicated to the astronauts. When I was asked to write down my thoughts about the tour, I wrote, “If you really want to get the Visitor’s Center correct, the history has to be accurate. If it were me, I’d dedicate a whole wing to The Team, who achieved an unbelievable goal. That wing should include all the contractors’ names. This amazing team, made up of the very brightest and best that America had to offer, is the team that time has forgotten.

Recently I watched the movie, Jobs, the story of Steve Jobs’ life. In one scene, he makes the statement that the launch of Macintosh was the second greatest thing to happen in this century, behind the Allies winning World War II. Well, he was wrong, the incident that wins is the launch of men to the moon and safely returning them home. IBM was a crucial part of that history. I implore you to read my book and ask yourself why in the world doesn’t IBM embrace this history?